Confessions of a coat room fondler

Oh dear. In the building where I work, there is a big coat room just inside the staff entrance. I live in Minnesota, so in the wintertime everyone hangs their coat in that room. And when you’ve got winter coats, you usually have winter scarves. Because I work in a place with many print, web, and furniture designers, there are many wonderful items of hand-made knit wear that one can find in our coat room on any given day, and I can’t help myself. I must touch the scarves. I must feel the yarn and see the stitches and fondle! Also, I must be careful about getting caught. If someone walks into the room and my back is turned to them, and if they can’t see what I’m doing, it looks a little weird. Maybe it looks weird even if they can see what I’m doing!

The other day there was one scarf in particular that really caught my eye. It was a deep orange, variegated ribbon yarn with a fuzzy orange yarn carried with it, done in a 1X1 rib. Oh, it was so pretty. As I was coveting this scarf, it started to dawn on me that … I MADE THIS SCARF! Yes. I made this scarf a year or 2 ago and gave it to my friend (who works with me) as a present. Guess I forgot all about it. It’s nice to know that I like my own work!

Ah, Elizabeth Zimmerman. I didn’t know anything about this woman ’till the Pie Are Square shawl. I was poking around on the Knit Picks site looking for something to make that would be a bit of a challenge, however I didn’t feel ready for a sweater yet. I was looking through the shawls and saw one in an unusual shape, that of a capitol U. I looked at the details and discovered that the pattern is in the book Knitting Around, by EZ. I had heard her name, but up until this point had not looked at any of her books or videos. I added the book to my cart and then set about choosing yarn. I had never purchased yarn online before, so to be on the safe side, I chose 3 thinking that I would use one for the shawl and return the other 2. Yeah, right!

So, I ordered the book, the yarn and thought to myself that I could get it done for a wedding in Tampa last October. I had romantic notions of my sweet husband and I on a yacht glowing with twinkle lights and my hand-knit, beautiful shaw flowing in the soft ocean breezes. Well, here’s the state of the shawl today: 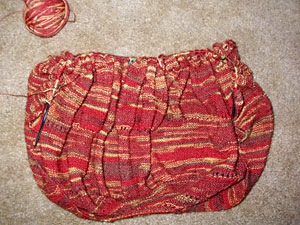 Still on the needles 🙂 Tons of garter stitch knitting. What I really like about this project is that I really don’t know what this thing looks like at the moment. The number of stitches keeps growing as you go along and so you can’t really see what the shape is or really what size it is without taking it off the needles, and I’m just not brave enough for that at this point in my knitting life. So, I’m enjoying the mystery factor. 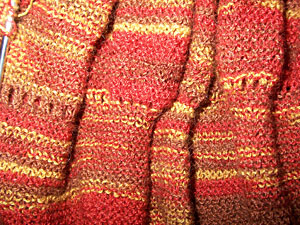 I’ve blocked one lace-weight project and so I’m really looking forward to that part of the process. I never knew something like blocking could be so magical. It really puts the finishing touch on a project. But wait. I’m getting ahead of myself. What the heck should I do for the edges of this shawl? A crochet edge would be pretty darn easy – ’cause I can crochet like the wind – but a knitted border would be a good learning experience. I’ll be searching for lace border patterns soon.

Jim came up with a great solution to a minor knitting irritation: what to do with all that yarn when you have to frog a knitting project. It happens to all of us, so it seems. And because I am a “new” knitter, it happens to me more than I’d like it too.

I’m working on my first pair of socks, toe up in stockinette stitch, following the instructions in Janet Rehfeldt’s booklet, “Toe-Up Techniques for Hand Knit Socks.” First attempt: toe cast on was pretty lumpy. Rip it. Second attempt: just can’t get the hang of that toe. Rip it. After looking through my knitting books and searching the internet, I found a toe cast-on that looked good: Denise Powell’s toe up sock instructions. Oh, it is a good one. Toe is smooth inside and out and the cast on is pretty easy. I started my increases and kept going ’till the sock reached the base of my little toe, ‘cuase that’s what you are supposed to do. After increasing, I switched to working in the round and went to town – knitting ’till the sock reached my ankle bone. Then I tried it on. Too. Big. Way. There was no way around it. The sock had to be frogged.

Some people might be taken by surprise witnessing a person ripping out rows of their knitting. The first couple of times I had to frog a project, Jim seemed to feel for me. It’s not pretty to take hours of work and rip it apart in a matter of minutes, but when the sock is too big, the sock is too big and Jim has gotten used to my “do-overs.”

An ugly pile of yarn started to accumulate, and being the kind of person who’s always tuned in to how to solve a problem, Jim’s mind started to go to work. He must have been thinking about the tangled protein story he just read, or else the extension cord we keep in a bucket in the garage, or maybe it was a combination of the 2. In either case, what he suggested was a brilliant idea that made my post-sock frogging life so much better!

Jim grabbed a plastic cup and started to feed the yarn into it. The only special trick he used was to just stuff it in as I was feeding the yarn to him. Rip, stuff, rip, stuff and pretty soon all the frogged yarn was all in the cup. 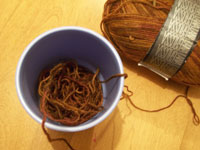 To be on the safe side, we taped the ball-end of the yarn to the side of the cup, to avoid the temptation to pull the wrong end, and all of the yarn, from the bottom of the cup. 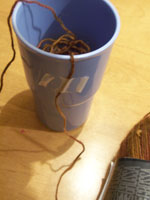 What was left was the working end of the yarn leading into the pile of yarn in the cup with the ball of yarn trailing behind waiting for me to catch up to it again. 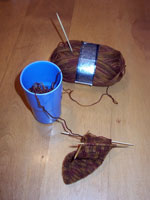 I started to knit again. Smooth cast on, fewer increases, then round and round all the while the yarn flowing from the plastic cup so smoothly it was like the yarn was floating in air. I’m not even kidding. For a moment I thought about pulling all of the yarn out of the ball and stuffing it into a cup.

That’s when the one thing that’s not-so-perfect about this process hit me: this is not a very portable solution. At least, it’s not as portable as a sock and a ball of yarn (sans the cup). So until I caught up to the ball yarn again I was pretty stationary with the entire project but did catch up soon enough and tonight I was Knitting In Public at our step-daughter’s orchestra concert! Woo!

So there you have it. If you have to frog a project instead of winding all that yarn around the ball (I find this to be an annoying way to work with a center-pull ball of yarn) just stuff that yarn into a cup. It’s a frogging dream come true! 🙂

(obligatory sock photos to come – once they are done!)